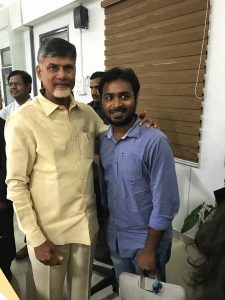 Harish, who studied at Riverside for his primary school years, is currently attending California State University, Northridge, getting his Master’s Degree in Computer Science. He alwaysdreamed of doing something big with his life, but didn’t have that guidance until his father had a car accident and he realized that Jesus had the healing power above any other god. His new faith in Christ translated into a mentorship from Chairman Darwin, who became a great influence in Harish’s career. Soon, Harish became inspired to give back to his village like Chairman did.

“I was raised here and I love this place, so I felt a lot of emotion when I first came back for the Smart Village Project,” he says.

Harish’s dream is to become an app developer. “I want to make an app that is compatible to everyone and works without net.” Harish’s passion to help people produced great work for the prototyping phase of the Smart Village Project. Harish had simple beginnings, but through his hard work and the advice from Chairman, Harish got the honor of meeting the Chief Minister at the conclusion of this project.